skip to main | skip to sidebar

Relay For Life - Walking for PawPaw

As I wrote in a previous blog entry, I'll be walking in this year's Wylie Relay For Life event benefiting The American Cancer Society. Our 12-hour walk is only 2 1/2 weeks from today! I am so honored & humbled to be able to walk & raise money on behalf of those who have suffered from this horrific disease. Like Sammy's PawPaw, Early (Duke) Rogers.

I went to church all my life with Sammy's grandparents, but never really got to know his PawPaw until Sam & I started dating. At that time, he lived with his grandparents while he attended Texas A&M University at Kingsville. So, I was over at PawPaw's house a lot! Years ago, he had purchased some land in the country & built his wife's dream home. It was the perfect place for all their beloved Dachshunds! Which is the first thing you noticed about PawPaw... all the little weenie dogs that followed him everywhere he went! Sam tells me that the most he had at one time was 12 dogs!! TWELVE! And, they were his babies, no doubt about it. He spoiled them rotten.

PawPaw was also an excellent craftsman! When he built his house, he also built a garage where he could do all his woodwork. He made dining tables, toyboxes, benches, lounge chairs, cabinets & much more. We have been the proud recipient of many of his handiworks, including a dining table & bench. We have since replaced the table in our kitchen, but we proudly display his beautiful bench on our front porch. It is definitely a work of art! When our twins were born, we were blessed to get one of the huge, amazing toyboxes that PawPaw built. It was such an honor to have something for our kiddos from him. We wish they could have known their PawPaw, but they will always know what a talented man he was!

Sammy always had the utmost respect & admiration for his PawPaw, as did so many people in the church & in the community. He was a teacher in the Bishop ISD school district for many years, teaching mathematics. He was a leader in the church, working quietly behind the scenes to help out wherever & whenever his talents were needed. He was a devoted husband, father to three, grandfather to nine & great-grandfather to one before his death in 1999. And, like me & my Granddaddy, PawPaw was the only grandfather that Sammy knew. Sam adored his grandfather & therefore, I did too! I wish he were still here today to see the kind of man his oldest grandson turned out to be. I know he would be proud!

So, on April 23-24, I will walk in memory of PawPaw. As I circle the track, I will think back to the time I was able to spend with him & get to know him better. I will walk in the hopes that other grandfathers are spared of this deadly disease. I will walk for Sammy's PawPaw. 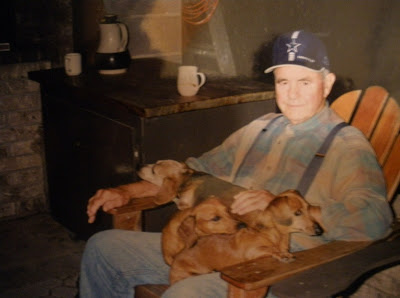 ********************
I feel very strongly about the mission of The American Cancer Society. I want to be a part of a generation that finds a cure to this deadly & devastating disease. And I am asking you to help me do that by donating to my Relay for Life page. My hope & prayer is that the money I raise for cancer awareness will help to save as many lives as possible!
Thank you for your support. It is overwhelmingly appreciated!
DONATE HERE

Amberly
Wylie, TX, United States
Welcome to our world: A chaotic and blessed family of five from Texas, experiencing life on the other side of the globe.